FDA’s Approval of New Alzheimer’s Drug Could Have Large Cost Implications for Medicare, Insurers and Beneficiaries

The United States Food and Drug Administration (FDA) recently announced accelerated approval of a new Alzheimer’s disease treatment developed by Biogen called ADUHELM.  This approval is significant in many ways. Aduhelm is the first novel therapy approved for Alzheimer’s disease since 2003.   Aduhelm will be given to via intravenous infused medication administered by physicians and as a result will be covered under Medicare Part B.

Medicare sets reimbursement rates for hospitals and providers, but they do not set rates for drugs covered under Part B.

Medicare pays 80% for most Part B drugs and services.  This leaves about $11,500 in potential out-of-pocket exposure for a year of treatment.  This will bring significant cost implications to Medicare, insurers and beneficiaries.

“If 1 million Medicare beneficiaries receive Aduhelm, which may even be on the low end of Biogen’s expectations, spending on Aduhelm alone would exceed $57 billion dollars in a single year – far surpassing spending on all other Part B-covered drugs combined. In fact, this amount is roughly the same that Medicare paid for all hospital outpatient services in 2019.”   — Kaiser Family Foundation

Facts and Figures from the Alzheimer’s Disease Association 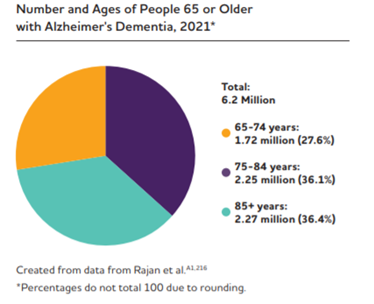 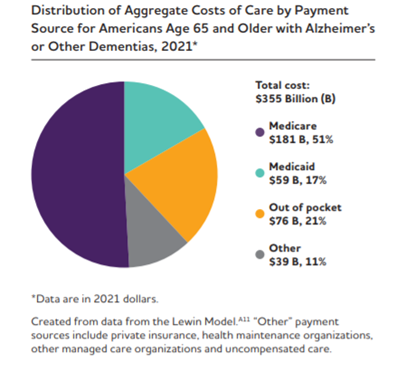 Links to Sources used above: